The Act on 10th of May 2018 on supporting new investments gives possibility to invest and benefit from the public aid not only at the former area of SEZs, but also at investor’s freely chosen property.

If the company is going to build a production hall, purchase of a new machine or a technological line, diversification or increase in production capacity; after fulfilling certain criteria it can apply for a decision on support and hence the public aid.

Being granted with the decision on support means exactly the same as receiving public aid in form of a tax exemption on legal and natural entitties. The intensity of the aid depends on the size and the location of the undertaking. For dolnośląskie voivodeship large entrerpeneur can get 25%, medium entrepreneur 35% and small & micro 45% of the expenditures (eligible costs) in form of exemption from income tax.

At the moment, to be granted with the decision on support the entity has to fulfill the qualitative and quantitative criteria. Quantitative criteria – understood as the minimum level of the investment expenditures which depends on the size of the entrepreneur as well as on the unemployment rate in the district.

The Decree dated 28th August 2018 stipulates on which kind of an economic activity the decision on support is not granted, this means on which PKWiU it is not possible to issue the decision.

The income tax exemption is eligible for an entrepreneur only since the month in which he or she incurs investment expenses from the day of getting the decision on support until its expiration. This means that all the costs e.g. cost of building of the production hall, cost connected with the purchase of the fixed assets, intangible assets – can be included to the costs eligible to be covered by the support on new investments only the moment the decision on support has been already issued !

The validity period of the decision on support is 10 years (15 years in case of investments at the area being covered with the borders of SEZ before the Act on supporting new investments came into force – available at the following link: www.mapa.ssemp.pl ).

Below there is a list of attachments to the application form:

– entreprenur’s statement that there have not been undertaken proceedings regarding the declaration of bankruptcy as well as the bankruptcy has not been declared,

– certificate from KRK (national criminal record) the the entrepreneur has not been sentenced (NO criminal record as a result from the article 14 point 2 of the Act),

– statement on commitment towards signing the contract on provision of paid services with the SEZ’s managing entity,

– commitment towards submitting the information to the SEZ’s headquarter in order to keep the records of support on new investments,

The entrepreneur is obliged to pay to the SEZ’s managing entity every month throughout the whole period of the decision’s validity – this is 10 years (15 years in case of investments at the area being covered with the borders of SEZ before the Act on supporting new investments came into force – available at the following link: www.mapa.ssemp.pl ), the remuneration for the services other than informative, being supportive towards conducting the economic activity on the base of the decision.

The amount of the remuneration is established on the base of the formula and it depends on few factors, among others: size of the entrepreneur, the amount of the declared eligible costs of the new investment as well as the property’s surface. 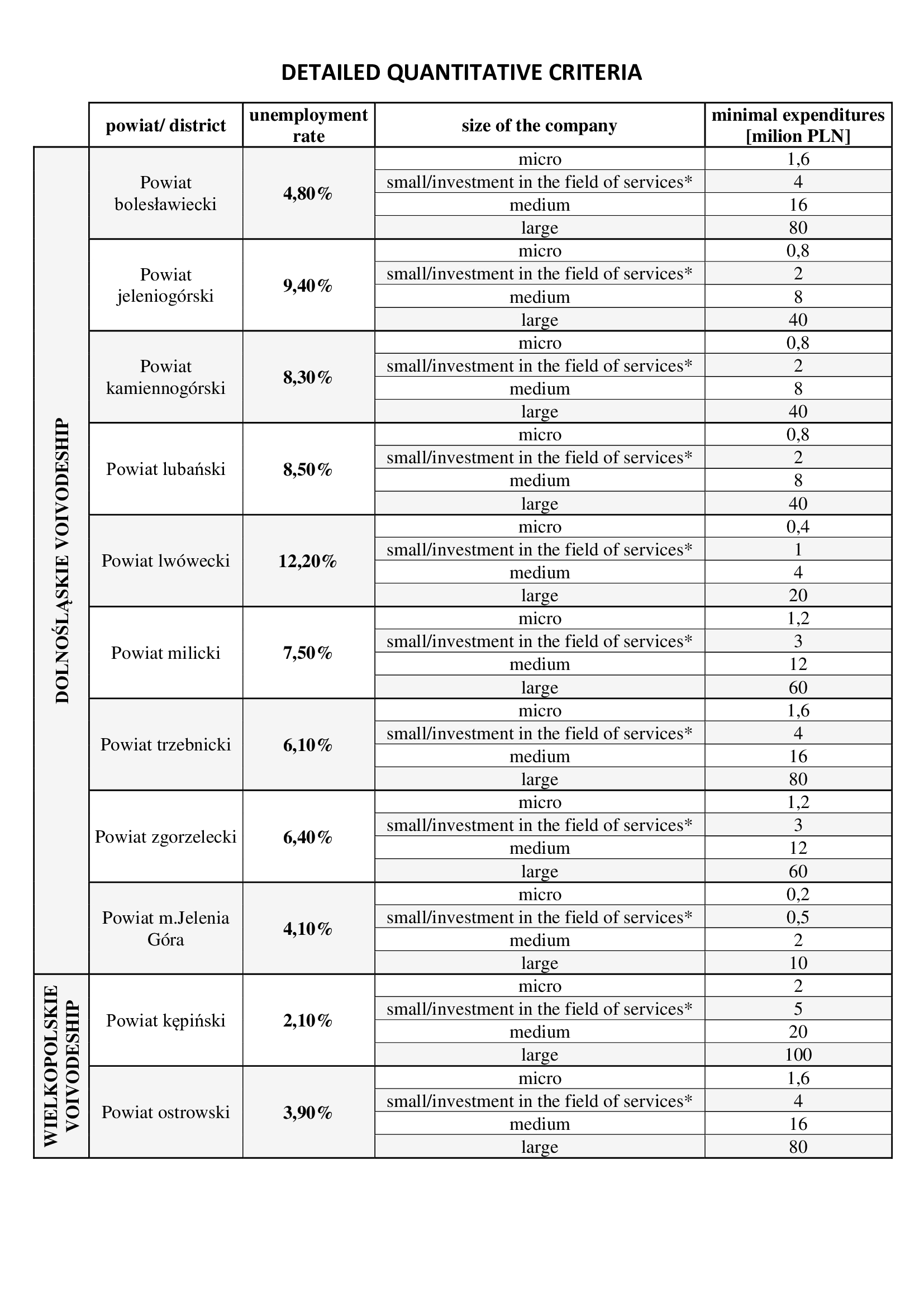 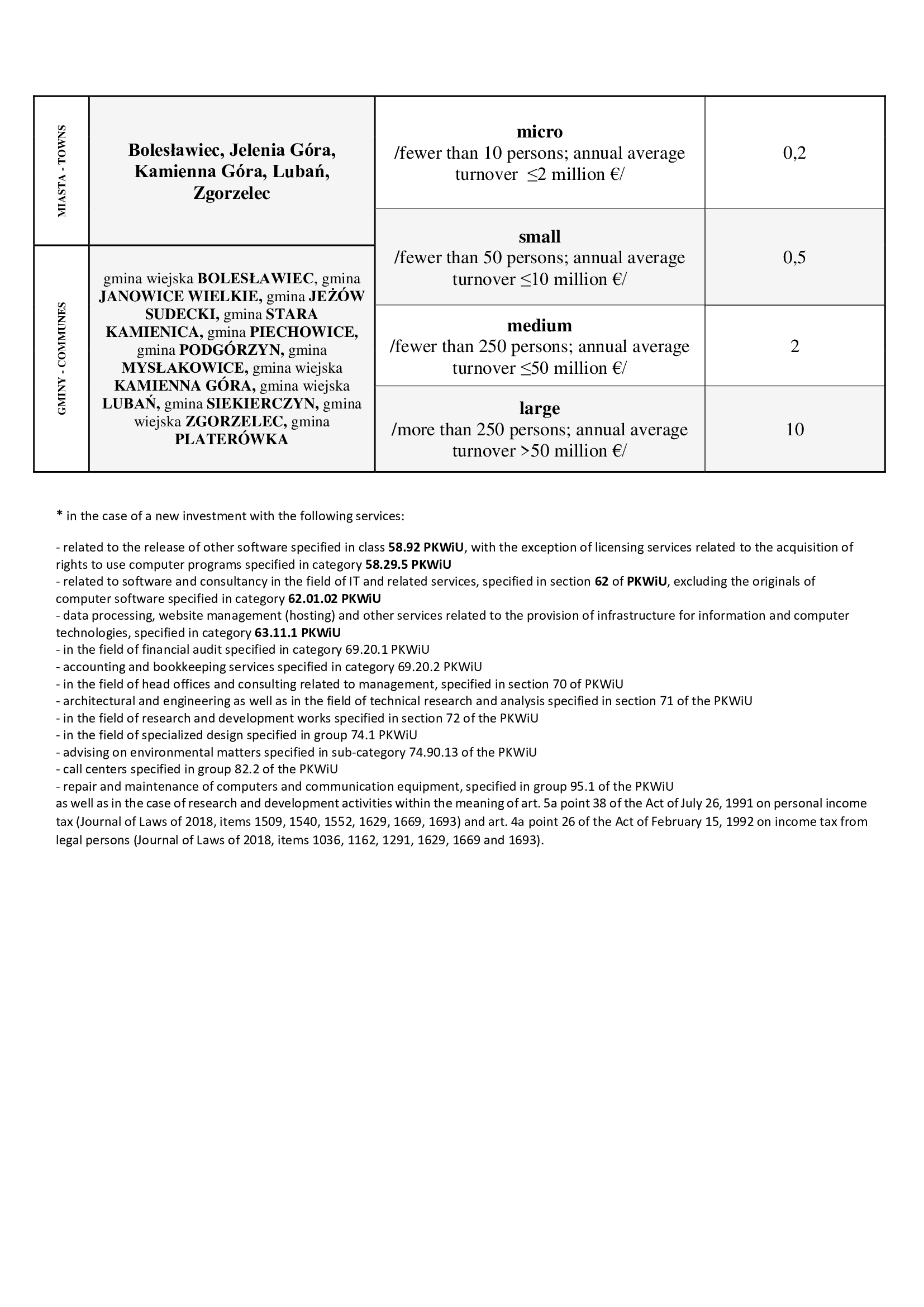